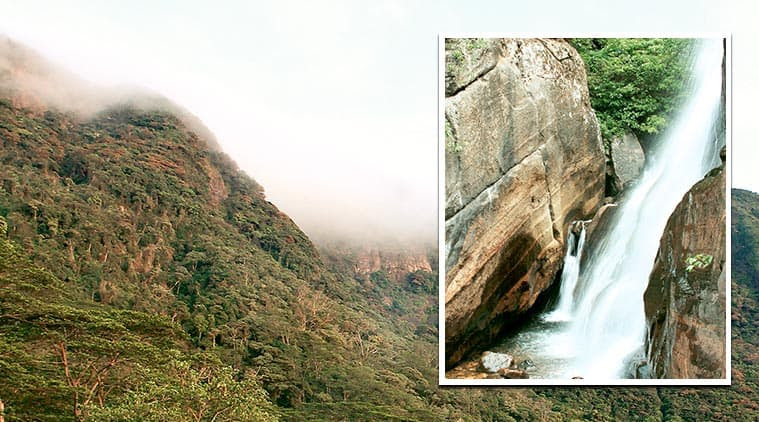 With cloud forests, grasslands and semi-evergreen rain forests, it has the climatic microcosm of the rest of the island.

One of the most difficult hikes on the Sri Lankan island, the Dumbara Kanduvetiya is a reminder of nature’s versatility. (Source: Adityavikram More)

They say the heart is one of the strongest muscles in the body. Yet, why does it feel the weakest at times? It leaps, it melts, it breaks, it soars, it sinks, it skips a beat. Sometimes, it is twisted like a trail in the hills. And when you visit the Knuckles, it just curls up and lays on the grass. This is exactly what I needed after a discussion on social media went shrill, with family friends targeting my family rather than the issue, reflecting the zeitgeist. I needed to climb high to understand how small my troubles were. The cure for my condition was well-prescribed. Knuckles, the fist-shaped mountain range in central Sri Lanka, can totally knock you out of your charged, over-civilised state!

Dumbara Kanduvetiya — the mist-laden mountains — or the Knuckles Mountain Range in Sri Lanka is a rugged mountainous kingdom, recalling antiquity. It was our second visit to these cloud-robed hilly forests with no mobile signals, no electricity and almost no artificial sounds. Mother of several rivers and streams and home to a remarkable assemblage of critters — many endemic ones that are not found in the rest of the world — Knuckles is a Unesco World Heritage site: a place of “outstanding universal value”. The forests are bewitchingly beautiful and terrifyingly fragile.

My partner and our two friends went camping by a cascading waterfall; I stayed back at a comfortable bungalow in the cloud forests as they scaled the summits and braved the stormy weather. Knuckles is one of the most difficult hikes on the island. You not only have to tread the thick jungles but also get the ticks and leeches off your back and all other unspeakable parts!

Half an hour of drive down the peaks will take you to a different forest and climate. While the peaks are cold and windy, the lower reaches are warm and humid. The uniqueness of this forest is its remarkable variety in such a small land mass — cloud forests, the high montane forests near the peaks, sub-montane forests, pygmy forests, grasslands, semi-evergreen rainforests in the foothills — the mountain range is the climatic microcosm of the rest of Sri Lanka. Isn’t it something that lends greatness to Lanka, which some of us are conveniently forgetting: diversity?

There is no construction allowed here. Most of the mortar and bricks that were laid here were ages ago. One such place is the over-a-century-old Sir John’s Bungalow, with sweeping vistas of the mountain range. Built by the British in colonial times, it is located amid the misty and sleepy peaks “at the threshold of a land before time”.

They say mountains have eyes. Knuckles has millions of them. While the 200 kinds of birds are partial towards higher floors with views, a variety of fish, crabs, molluscs, geckos, skinks, calotes and snakes prefer water features in their homes. Insects buzz, fly and hop, claiming the entire forest as theirs. Barking deer, sambar and elephants roam on the periphery while others such as wild boars, giant squirrels, leopards, long-clawed shrews, purple-faced leaf monkeys and porcupines wander in the middle and upper reaches. The 35 peaks have a substantial share of Sri Lanka’s endemic trees, shrubs, and herbs.

Whether it is the elusive slow loris, recently re-discovered (like Vasco de Gama “discovered” India) after its declared extinction, or, the rather bold toque macaques going about their daily routines completely ignoring our presence, you may not see the animals, as it is very difficult to spot them in the cloud and rain forests, but you often hear their disembodied voices.

A stunning array of orchids hangs on trees, looking posh. John Davy wrote in 1821 about Knuckles, “I never saw before so perfect a specimen of forest scenery. Here lie trees of different kinds, sizes and ages: some saplings, some dead and decaying, and some of very great bulk and height towering above the rest in their prime.” Knuckles is geriatric in its beauty; the gnarled and twisted trees, covered with lichens, mosses and hanging ferns, stand on their bent backs telling timeless tales.

This extremely sensitive area, a bio-hotspot and home to rare creatures not found in the rest of the world, stands facing threat from one of the biggest follies of organised human society: political patronage. Dozens of projects dubiously approved had to be halted more than a year back owing to the pressure by the media and conservationists. The destruction, though, caused by widening roads and increasing human activity, was evident to us on our second visit this time. Knuckles is struggling, dealing with knuckleheads.

It is said that the story of these hills goes back to the prehistoric times, even hinting at Yaksha settlements in the area. No, Yakshas are not fanged demons, but one of the fabled clans of yore. Archaeologists say that the Mesolithic man lived in the caves in Knuckles and the Buddhist monks 300 BC onwards. When you see the quaint villages tucked away in the folds of the mountains, living by the symphonies of jungle rhythms, you can sense the ancient in them.

I went to Knuckles to seek time, to marvel at the changing lights of the day, to stare at the clouds rolling over the peaks, to find frozen mythical creatures in the shapes of the mountains, to sit by the fireplace and read, to drink the night air and the whistling of songbirds, to observe what way the candle flame would duck to avoid a sudden death by wind, to listen to my breathing and be utterly useless to the world. Although I knew when we drive down the mountains, that it was all going to be downhill from there, I brought along, in one of the strongest muscles of my body, their good tidings.