THE TIMES OF INDIA: 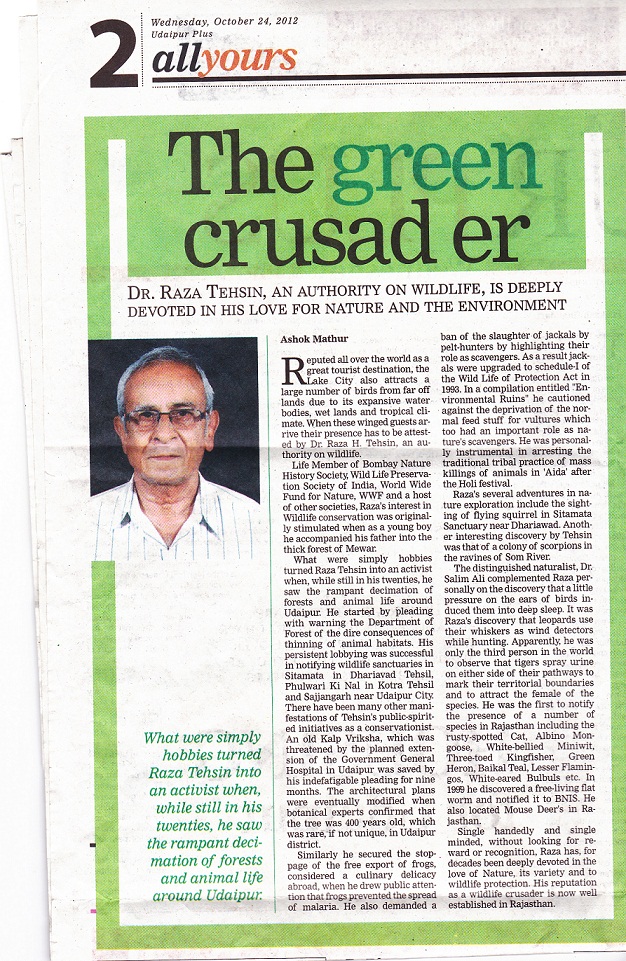 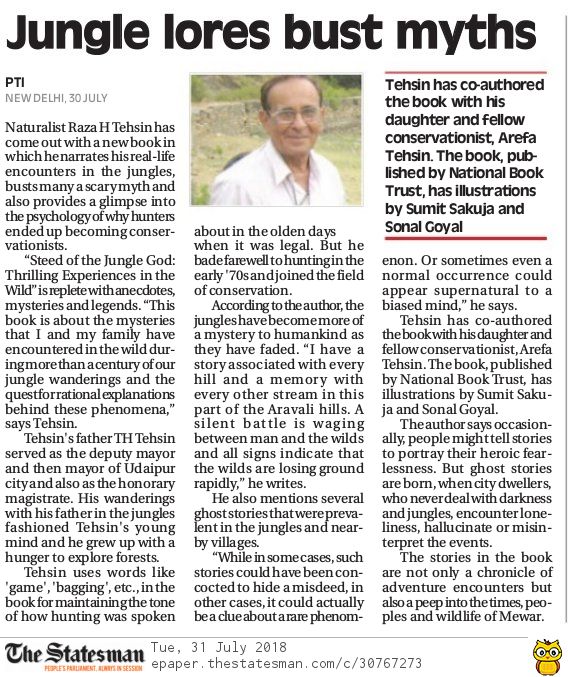 Interview on Channel 24 on Save Gulab Bagh campaign:

Raza H. Tehsin, a household name in this region, is the initiator of Wildlife conservation movement inSouthern Rajasthan. Son of a renowned shikari T. H. Tehsin, one of the earliest big game hunters turned conservationist ofIndia, Raza grew up seeing jungles and animals around him. His father’s monopoly of arms and ammunition business in Mewar and his passion for hunting kept Raza in the forests for long periods of time since he was a child. This not only brought him close to Nature but also increased his knowledge of indigenous herbs and medicines.

For the past 40 years, Raza has been giving an indigenous  treatment to people affected Leucoderma/Vitiligo: www.leucodermatreatment.in

Fondly known as the Vasco de Gama of Udaipur jungles, Raza has traversed most of the southern Rajasthan forests on foot. In the post-independence era, he started taking care of the family’s extensive mining operations in the forested hills and valleys around Udaipur. He stayed for years at end, alone, in uninhabited jungles of the Aravali hill ranges. Witnessing the rampant destruction of forests and wildlife with the spread of human population and commercial poaching, this jungle lover shed his weapons and started a crusade for wildlife protection and conservation.

He has since then been instrumental in the establishment of game sanctuaries like Phulwari-Ki-Nal, Sitamata & Sajjangarh and has reported for the first time around 14 species from this region, as well as India like Flying Squirrel, Mouse Deer, Snow Trout Fish, Albino Common Mongoose, Rusty Spotted Cat, Albino Mongoose, Albino Squirrel, Lesser Flamingos, Baikal Teal, Three-Toed Kingfisher, White Bellied Miniwit, White Eared Bulbul, Green Heron, Flat Worm and Bittern Bird. He has pioneered many works and campaigns like protection of a 400-year-old Kalp Vriksh (Adinsonia digitata) during the extension of Government hospital building. He is one of the early naturalists of India to study the effects of Solar Eclipse on fauna. He drew public attention to the free export of frogs, which prevent malaria. It resulted in its ban by the Govt. of Rajasthan & curb of its export by the Govt. of India. He demanded a ban on the slaughter of Jackals highlighting their role as scavengers, which resulted in the up-gradation of this animal to Schedule I of the Wildlife Protection Act. He observed Lunar Tides in Bhim Kund (a fresh water pool) in Banswara District. In a landmark achievement he convinced the tribals aroundUdaipur to leave the practice of Mass Hunting – ‘Aida’. He has also been one of the first to raise his voice about the declining vulture population.

He has provided research guidance and project assistance to students not only fromIndia but from other countries as well.

Raza’s articles have appeared in Books like Environmental Studies book of NCERT (Central Board syllabus for schools in India), Man Now Competes With Scavengers and Shikari Shikar Jungle Se Pyar (Hindi) and Magazines like Dharamyug and Mystic India.

He keeps appearing on talk shows on TV and radio channels and has been covered by TV channels like National Geographic, India TV, Star News, ETV and Channel 24.

A pioneering survey to ascertain the Most Beautiful Tree of India was led by him. He is also the compiler of the checklist of birds of Southern Rajasthan.

Limca Book of Records (1996) carries his name for a survey conducted by him to ascertain the quantity of spit being spat by tobacco chewers inIndia every year.

Environment and natural studies scholars, as well as nature enthusiasts from different fields and professions come to him for guidance not only fromIndia, but from all over the world.

Some Praises of Raza and his Works:

“I know of no one who single handedly and single mindedly, without looking for reward or recognition has, for decades, been so devoted in the love of Nature, its variety and to wildlife protection.”

“It was obvious to both of us that you are more conversant with conservation problems inIndiathan most of the people we met. We are more than pleased to write to your government or its departments or to get Members of Parliament fromEnglandto do that if you think it would help.”

“I am grateful to you for alerting us to this idea for an inaugural entry in the Guinness Book of Records.”

“A born naturalist, Dr. Raza Tehsin has been passionate about the natural world from his younger days in a manner that is indeed uncommon and commendable. This book will surely be a very valuable compilation containing a wealth of information as well as the unusual insights of a remarkable person who stands in a class of his own.”

“My encounter with you gave me hope and a positive perspective ofIndia. The work you are doing not only helps the people ofUdaipur, Rajasthan andIndiabut the whole world.”

“We may seek an opportunity to arrange your visits for field observations both inIndiaandIran. Your concern to a deep understanding of the tribal communities as specific cultural entities is much appreciated.”

“We thank you for your letter dated20 December 1985along with your interesting note on a sample survey conducted by you “In India Tobacco Chewers Spit 1.564 million tones per annum”

“I’ve seen your rather touching and very interesting account in Vol. 40 of Newsletter for Birdwatchers (Nov-Dec) 2000 on ‘My Encounters with a Survivor’. So extremely well written!”

“I learnt about your experiences of jungle life and will like to know more about the mysteries of various animals in forests as you are very much conversant with it.”

“It is our fortune that during the course of two years’ investigations ofPicholaLake, we could discuss various aspects of this fast deteriorating wetland with you and enrich our knowledge through your lucid accounts.”

“The Society has decided to honour you with the prestigious award “Vikas Ratna” for the excellence in your field on 11th May 1995 inBombay, which shall be attended by Union Ministers, State Ministers, Intellectuals and Industrialists.”

“This is to congratulate you on your beautiful observation published in the latest issue in Tiger Paper…I wonder if anyone else has been lucky enough to witness such spraying by wild tigers stalked on foot…It is astonishing that men like Inglis, Brander and Corbett never noticed spraying.”

“It is a great pleasure to go into the field with an expert observer such as yourself.”

“A short note to thank you for your fascinating tit-bit of information on the trapping and handling of Grey Junglefowl. I must try it myself! It is a short (but very interesting) piece… Observations such as this are of very great interest, which I am always delighted to receive – very many thanks!”

The Indian Forester: PANTHERS OF SOUTHERN RAJASTHAN: MY OBSERVATIONS OF 65 YEARS