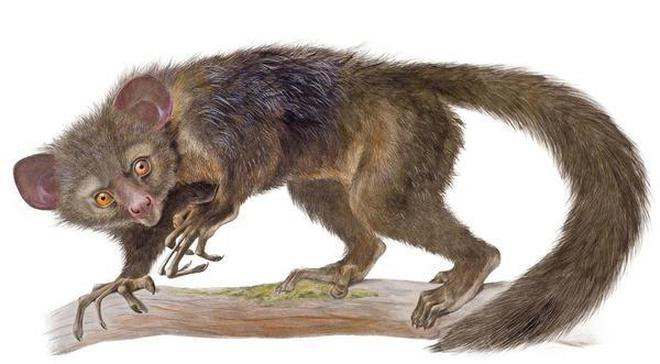 If they are neither cute nor cuddly you wrinkle up your nose in disgust. But, these animals think well of themselves and don’t give a hoot about our opinions.

We drool over the tall, dark and handsome, or the slanting doe eyes or the rose-petal lips. And the majestic mane of the lion king, the emerald blues and greens of the proud peacock, the fins of a goldfish forming liquid golden clouds… What about a pendulous nose like that of the Proboscis Monkey, or a smile with zigzagged teeth like that of a croc, or a nose tipping with fleshy rays like that of the star-nosed mole? Don’t tell me only a mother could love that.

“Nay nay,” this primate will say. “Who are you calling ugly, dude?” Found only on the island of Madagascar, these rare dark brown mammals of the night have big eyes and ears, long bushy tails and rodent-like front teeth that keep growing their entire lives. They spend their days on trees sleeping curled up like a ball in their leafy nests and seldom descend on land. They have pointed claws on their long fingers and toes. It’s not just their gremlin look that makes them freakishly ugly to us, it’s their skeletal long middle finger.

At night, they tap-tap on the tree trunks with their long finger, hear the echo with their sensitive ears, tear away the bark with their large teeth to reach the insect tunnel and use their long finger as a grub dip-stick. It comes in handy to pry for insect larvae and grub…I mean grab a bite. People believe they are harbingers of bad luck. If they point their long witchy finger at you, you’ll die. People often kill them at sight and hang them upside down. Now if that isn’t ugly (and supremely idiotic), then what is? You may call it shaggy and unkempt due to its round, hairy appearance, but count your stars it can’t hear you and doesn’t stay on land. Shaggy Frogfish is a deadly predator of the seas who can swallow a prey almost as big as its own size, opening its mouth as wide! It doesn’t like company except when it goes out on a date. If the lady chooses to hang around a little after the date, the gent might get cross and have her for dinner. These fish, which are around 20 cm long, are masters of disguise. They can change their colour and use their dorsal spine as a fishing lure. Even if their fin is eaten by an unsuspecting prey, they regenerate another one. Simple. But the prey is unlikely to grow another head before next Christmas.

The writer is a columnist, author of fiction and non-fictions books and Ex-Hon. Wildlife Warden, Udaipur