The photographs by Adityavikram More

From the bottomless beyond 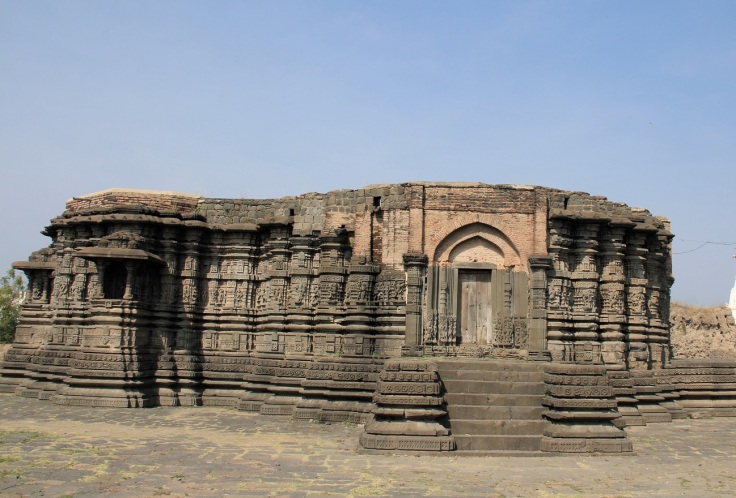 There was a woman (I read somewhere) who told her friend — “Last year we went around the world. This year I think we’re going somewhere else.” One such ‘somewhere else’ is Lonar Crater, the world’s only salt water lake in basaltic rock, unearthly and alien.

A meteor came flying in earth’s atmosphere, right from the bottomless outer space some 50,000 years ago.

Rather than becoming a shooting star with a fleeting glory, as is the fate of small meteors that enter earth’s atmosphere, this one left a dimple on her cheek. Weighing two million tonnes, the ball of hellish fire came gushing at a speed of 90,000 km per hour on a suicide mission. And wham! The impact on the super-hard basalt rock bent its surface and ego. The impact was equivalent to an explosion of six megaton atom bombs.

Creation of the crater

Man evolved on earth and this once earth shattering crater, now a salt water lake, came to India’s share, finding a home in the Buldana district of Maharashtra. We drove down 13 hours from Mumbai to witness the splendour. You don’t need to have deep pockets to visit this crater; even patched ones would do. But the low budget didn’t motivate our friends. “Who would go to see a hole?” they sniggered. “To see how the surface of the moon looks like,” I wanted to answer, as this crater in basaltic rock is a good analogue to the impact craters on the moon.

The meteor didn’t lie there like a fall-bruised apple on an autumn morn, but it blazed and vanished, leaving a giant hole as a telling reminder of the powers that are. The lake that evolved subsequently is a wonder. It is saline and has a neutral (pH7) region in it as well. These two regions remain separate, like angels of heaven and minions of hell. It is 1.2 km in diameter and around 500 ft deep. The slopes inside the rim to the lake are forested, housing many birds, medicinal plants, gazelles and temples.

The area around the lake is as mysterious as the invisible ghost of the meteor that made the dent. Apart from the temples dotted inside the crater, there is also the famous Gomukh Temple that stands at its rim. A perennial stream with potable water and neutral pH flows from this temple and people bathe in it in the hope of purging their sins. The source of the water is unknown and it has retained its mystery by flowing even during draughts. What caught our interest was a Sati Stone on the way to Gomukh. We were told it portrays woman’s allegiance to a man till the end of time.

The Daitya Sudan Temple, with the Lonar town surrounding it, is dated to the Chalukya dynasty. An idol of Vishnu is housed inside it, standing victorious over the demon Lonasur.

Mysteries of the meteor

It is believed that a piece of the meteor split and hit the ground a little away from the rim of the main crater. Hence there is a much smaller circular depression 700 metres away, almost identical to the main crater. Near this Little Lonar is a Hanuman temple with the idol carved on a vertical rock. The flinty-eyed idol is supposed to be highly magnetic. Little Lonar has recently lost some of its characteristics as the local farmers have dug a channel to drain the water, which was affecting their crops on the sides. The water of the Lonar crater is indeed fascinating. It finds its mention in Emperor Akbar’s Ain-i-Akbari, which talks about the production of glass, soap and saltpetre from the area. It hasn’t escaped the eyes of The Smithsonian Institute, US Geological Survey and Geological Society of India among others who have studied it in detail. There is a freshwater well right at the lake’s edge. Some algae and bacteria found in this lake are said to have medicinal uses. These charmed waters abound in salts, sodas and nitrogen fixing micro-organisms. Fishy, you say? But they are fish-less.

As you walk down in the evening to the forested slopes of the crater, which look like hills, and reach the banks of the lake, the acrid smell of the waters sizzle through your nose. The timeless eye of the crater looks back at you squarely. The stillness is intercepted by swaying grasses on the banks and calls of Brahmniny Ducks, who have flown across continents to spend their summers here.

Lonar Lake has witnessed history through centuries of Ashoka’s empire, then Satvahana’s, Chalukya’s, Rashtrakuta’s, Mughal’s, Yadava’s, Nizam’s and the British. However, the lake is now losing its liberty to exist. Littering by pilgrims, household effluents, fertilisers  from fields pollute the lake year round, reducing its salinity, cutting down its magic to size.

Let’s protect this wonder. Want a brand new crater, you say? The only survivors left to see it would be the cockroaches.

2 thoughts on “Deccan Herald: From the Bottomless Beyond”