Aggressive Behaviour of a Thirsty Leopard

There is a small spring called Kooda-ka-Joira situated high up in the hills about 20 kilometres northwest of Udaipur. In 1950s, the jungles around this spring were teeming with four horned antelopes, sambar and wild boars. Almost all the wild ungulates have been poached. Carnivores of the region (like leopard and wolf) chiefly depend on the livestock now. 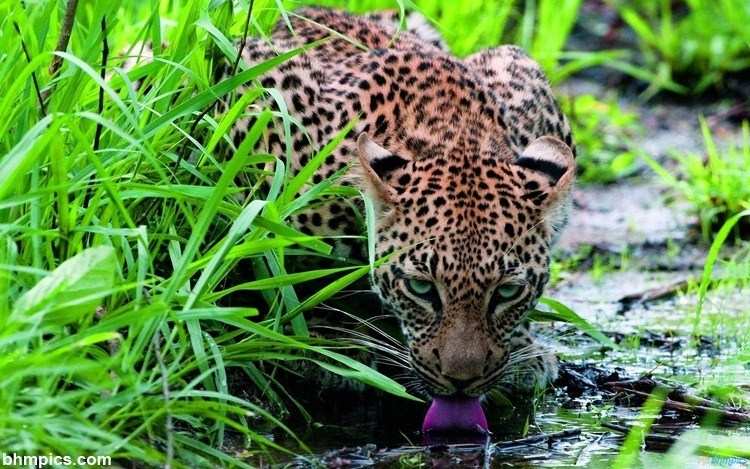 There is a small spring called Kooda-ka-Joira situated high up in the hills about 20 kilometres northwest of Udaipur. In 1950s, the jungles around this spring were teeming with four horned antelopes, sambar and wild boars . Almost all the wild ungulates have been poached. Carnivores of the region (like leopard and wolf) chiefly depend on the livestock now.
On 21 st April 1991, late in the evening, our family went to the spring for an outing. Leaving the jeep about 200 meters from the spring, we walked down the remaining part and settled on an open patch near the water. As darkness approached, we lit a carbide lamp and enjoyed the silence of the night with some snacks, tea and light talks. Suddenly we heard a low growl of a leopard from the undergrowth, some 20 meters from us. Our voices reduced to a murmur. Our family has always enjoyed close encounters with leopards so it added an extra flavour to our outing. My father T. H. Tehsin, whom we as well as others called Bapu, had over 76 years of experience in the jungle. He was worried and asked us to vacate the place immediately. We were reluctant to do this, especially as the children were keen to see the leopard. Soon we found that the growling increased in intensity and the leopard started circling us in the undergrowth. Bapu said that it was very dangerous and we must quickly leave the place. We hastily packed up our belongings.
Meanwhile, the growl changed into a loud cough. For illumination, we had only two pencil torches and a carbide lamp. As we prepared to depart, my elder brother (Riaz Tehsin) took three-four steps away from us to pick up the lamp. At the same moment, with an ear-splitting cough, the leopard broke cover and charged towards him. All of us, including Riaz bhaiya, remained where we were. The leopard stopped about thirteen feet from Riaz bhaiya hissing, growling and lashing its tail. How long this state remained, I can’t say, as it seemed too long. It was actually less than a minute. The leopard slowly turned its head, leapt into a bush and disappeared from our sight.
Riaz bhaiya quickly picked up the lamp and we retreated hastily towards the jeep. Bapu explained that the leopard was very thirsty and was in dire need of water. The other source of water was about three kilometres away. Because we were close to the spring, it warned us by growls to leave the place and when we were reluctant to do so, it desperately charged towards us. None of us tired to run at that moment, else things would have been unpleasant. Next morning, we found from its pugmarks that it had drunk water from the pool later that night.
The incident explains how such encounters can become dangerous. There are several theories advanced by different naturalists about the causes of a leopard turning into a man-eater. These are scarcity of food, injury, incapacitation by bullet wound, injury by killing porcupine, cubs restoring to man killing if the mother is a man-eater and so on. However, they are unable to explain why some of the healthy animals without any family history become man-eaters. Majority of the naturalists unanimously agree that if a leopard overpowers the fear of man and kills him, then it realizes how puny, less strenuous and easy to stock a human is, which it dreaded so much. So it becomes a man-eater. Some instances like the one cited above could explain how a healthy leopard without a family history may become a man-eater.